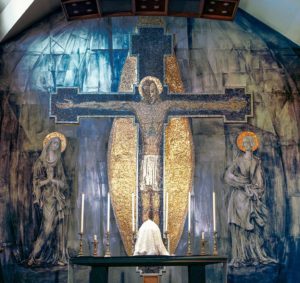 Manchester Civic Society has written to Historic England to support the listing of the former Church of the Holy Rosary building in Oldham so that the rare example of a mural by Hungarian artist George Mayer-Marton can be protected.   ‘The Crucifixion’ is an unusual combination of mosaic and painted fresco completed in 1955 in Oldham’s Church of the Holy Rosary in Lancashire.

The church has been redundant since 2017 and the mural is increasingly at risk of vandalism, theft, and the threat of redevelopment.

Below is the full letter submitted to Historic England in support of the listing.

Mural in Mosaic and Fresco by George Mayer-Marton

Manchester Civic Society writes in support of the application to preserve, by listing its host building, what is now popularly known as the ‘Oldham Mural’, a mosaic and painted fresco which covers the wall behind the altar in the Roman Catholic Church of the Holy Rosary in Oldham.  The church, which has been closed since 2017, is within the RC Diocese of Salford.  The building is beginning to show signs of deterioration, putting the mural itself at risk from vandalism and deterioration.

Manchester Civic Society engages with major issues within Greater Manchester in those Metropolitan Boroughs which have no Civic Society at present, as is the case for Oldham.  In common with a wide range of august art and architectural bodies, we ask that Historic England employs the powers that it has, and has used in similar circumstances, to list the church building so that the mural can be further protected and its undoubted quality again appreciated by the general public.

The 1955 mural of the Crucifixion is the most striking example of the ecclesiastical work of the Hungarian artist George Mayer-Marton and one of only two of his murals that survive in situ.  Another of his mosaic murals, the Pentecostal tongues of fire, has been moved from the now-demolished Church of the Holy Ghost in Netherton to a prominent location within Liverpool Metropolitan Cathedral.  The enterprise, supervised by Robin Riley, was described as ‘technically challenging and was a very expensive project.

The Oldham Crucifixion mural is a magnificent work of art.  The halos and the panels surrounding the cross are examples of Byzantine mosaic.  Their use by Mayer-Marton draws on the pre-war studies that he undertook in Ravenna, where he was able to appreciate beauty of the gold smalti used in the Byzantine buildings in Ravenna, now, in recognition of their excellence, a UNESCO World Heritage Site.  He thus understood the traditional technique of angling each tessera differently in its setting bed and thus controlling and adding to the play of light across the mosaic mural.  It has been claimed that, in Ravenna, the technique enabled a single candle to light up a vast interior.

The effect achieved in Oldham by Mayer-Marton’s masterpiece has been described variously as dazzling, shimmering and glittering.

SAVE Britain’s Heritage’s Director, Henrietta Billings, identified Mayer-Marton’s employment of such techniques when she visited the Church of the Holy Rosary recently and saw how the light from the side windows was reflected off the mural and down the aisle, mingling with the coloured light shed on the aisle from the stained glass window at the opposite end of the church.

This insight into the sophisticated impact which Mayer-Marton achieved within the church makes a compelling case for retaining the work in situ, rather than embarking on a challenging and costly attempt to remove it.

One further complication which removal would pose is the extent to which the fresco which surrounds the mosaic has largely been painted over, although tests have indicated that the paint can be removed successfully.  The fresco shows not only the figures of Mary and Saint John, both with glittering halos, echoing Klimt, but also a landscape background with echoes of Braque and Cubism.

These further elements of the Oldham Mural hint at the scope and variety of Mayer-Marton’s oeuvre.  Sadly, much of his pre-war work was left in Austria as he fled Nazi persecution due to his Jewish heritage.  Much of the little he was able to take with him was destroyed by enemy action during his wartime refuge in London.

The case for preserving the mural in situ is compelling.  As usual, SAVE is seeking practical alternative uses for a building under threat.  Despite the intervention of the COVID pandemic, progress has been made, with the Hungarian community in Greater Manchester expressing interest.  Others may follow as the mural, now hidden, becomes better known.  The levelling up agenda has only just started, but ahead of this, Eton College has chosen Oldham as one of its three outposts.

Meanwhile, Manchester Civic Society strongly urges Historic England to formally recognise the need to protect the building housing this work by listing it, and thus protecting the Oldham Mural itself.