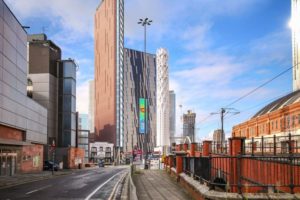 Manchester Civic Society has submitted a formal objection to the truly awful Apex tower which will cast a shadow (both actually and metaphorically) over the beloved Britons Protection pub.  So far the plans have received a raft of objections and very little support.

It is the last week to lodge your formal complaints to the MCC planning committee, deadline is 17th April. Use the (misleadingly bland) ‘Make a Comment’ button- it’s the official way to object. https://pa.manchester.gov.uk/online-applications/applicationDetails.do?activeTab=makeComment&keyVal=R8IVTNBC0CT00

Thanks to the Peterloo Memorial Campaign who have some interesting posts on the issue on their facebook page (https://www.facebook.com/groups/335950663264).

Our full objection is as follows:

Our grounds for this objection are:-

This proposal is to develop a very small site.  The footprint of the A block is so tiny that it will accommodate a total of just three housing units (each of 2-bedroomed flats) on each level.  The delivery of 26 storeys of this will provide 72 units, all of similar 2 bedroomed accommodation.

In reality, the building is much taller than these 26 storeys.  At the junction of Albion Street & Great Bridgewater Street the tower is supported on huge struts which generate a space from ground level to the lowest of these 26 storeys.  This extra height is almost equal to the total height of the Britons Protection building.  The pub is three Georgian/Victorian storeys high, so the true dominance of this tower over the neighbourhood is diminished by a description of ’26 storeys’.

In further detriment to the appearance, the proposal sandwiches the Britons Protection building, with both Plan A and Plan B buildings immediately abutting the listed building.

The appearance of this very tall building on a tiny footprint, the size of a small car park, is out of keeping, even with the tall buildings which now populate parts of the city centre.

The published data do not explain why building so high is needed here.  On such a small footprint, the height of this tower (26 storeys plus the height of the struts that support it) must generate large development costs.  It seems that these are being pleaded in support of the total loss of affordable housing.

This use of viability data to suppress the delivery of affordable housing is not new.  It has been condemned in both Houses of Parliament, examples are below.

It seems to Manchester Civic Society that the viability of far less intrusive options for this sliver of land should be fully investigated ahead of any decision based on this sole option, given that choice of this option defeats Council’s Policy on Affordable Housing.

It is accepted by the developers in their heritage submission that harm will be inflicted by this development.

Manchester Civic Society contends that this assertion by the developers does not fully engage with the degree of harm inflicted on two adjacent Grade II Listed Buildings; the Britons Protection building and the former warehouse at 13-17, Albion Street built c 1860-70.  Both will be totally dominated by the Plan A building.

Substantial Harm will be inflicted on both.  Thus the proposal cannot gain approval under national NPPF policy.

The Britons Protection building has social and historic links to the Peterloo Massacre 200 years ago, and, quite separately from its physical merits, is proudly valued by Mancunians for these.

As a building, its early C19 structure is at the cusp of Manchester’s rise to international dominance in the Victorian era.  The proposal would have both Plan A and Plan B structures abutting it, apparently connected, clearly inflicting substantial harm.

Similarly, on architectural grounds, we believe that substantial harm will be inflicted on the significance of the former warehouse at 13-17, Albion Street.  This distinctive and handsome building was built c 1860-70 and is immediately adjacent, across the narrow Trumpet Street, to the Plan A building whose height will totally dominate it.  Again, this conjunction of buildings does not conform with NPPF constraints on substantial harm.

This part of Manchester is rich in historic buildings.  Manchester Civic Society considers that harm, albeit ‘less than substantial’, is inflicted on many nearby properties and Conservation Areas.  These include:

The application’s Heritage Assessment, asserts that no harm exists.  Manchester Civic Society considers that harm, albeit ‘less than substantial’, is inflicted on these properties and Conservation Areas.

Whichever way one looks at it, this pair of buildings will inflict serious harm on its immediate neighbours and nearby historic assets.  Paragraph 202 of the NPPF is therefore engaged, which states the following:

“Where a development proposal will lead to less than substantial harm to the significance of a designated heritage asset, this harm should be weighed against the public benefits of the proposal including, where appropriate, securing its optimum viable use.”

It is clear that, even given the lower standard of ‘less than substantial harm’, this proposal will do nothing to ‘secure the optimal viable use’ of the Britons Protection or 13-17 Albion Street.

It seems to us that this development has a fundamental problem in delivering any public benefit at all within the very restricted curtilege of the development site.  In effect, with no offer of social housing on site, the developers been forced to rely on nebulous wider matters to be able to identify anything at all that could be considered to be a public benefit.

Manchester Civic Society contends that the delivery of public benefit falls well below the degree of harm inflicted here.

In conclusion, Manchester Civic Society considers that this site and its environment justify a far more sympathetic proposal than this one.  We urge rejection of this proposal.